Google recently unveiled Android L, then finally revealed what we all knew, that it was called Lollipop, alongside the new Nexus line. But, whilst the new Nexus 6, Nexus 9 are all good and that, sure have their problems, less attention has been given to the new platform running on them coming to existing Android devices, Lollipop itself, so let’s fix that shall we.

We all know the initial responses of Apple’s iOS 7 when it first got released, it too was brighter, introduces reflective cloudy interfaces and we all went ape-s*** till we got used to it, but with Android 5.0 Lollipop, everything is just different in a weird way. Gone are the dark, subtle lines from the Android of old, and in comes bright paste pastel colours throughout, it all just looks childish and poor … don’t get us started on that stock app drawer! We’re also interested how Sony will take to using the Playstation-esc software keys on their Xperia devices come 2015 too.

On the Home Screen however, the changes are rather minimum, if visible at all. Swipe over to Google Now you’ll see the same interface you’ve known, it’s only until you actually do something in Lollipop you’ll see the interface differentiations.

Even the Quick Settings toggle makes you feel as though you’re running a skin created by a low-cost Chinese device, which in expanded view gives notifications very little room to be of any impact at all, something which wasn’t a problem previously with the two stage view.

The icons in the status bar see subtle changes too, now completely white coloured, rather than showing status lines or shadings as previously, which we don’t know about you, but gives them less impact and fidelity.

We don’t hate everything about Android 5.0 Lollipop, but these very up-front first impressions still to this day, give us a bad taste in our mouth, especially as they all affect aspects of the operating system you see the second you unlock.

Speaking of unlocking, one area of Android 5.0 Lollipop we do like the changes and “advancements” in, is indeed the Lock Screen, which brings some ironically ‘new to Stock’ features, as well as some features of familiarity, as well as some nice improvements.

The design of the Lock Screen in Lollipop is much more front and centre, and that’s something we actually really welcome from the previous, and, as you can see from the example screenshot, the Lock Screen can finally display Notifications in its own area, rather than having to insecurely pull down the Notification Shade, a very long-waited feature which Stock Android finally takes from iOS … sorry Phandroids I meant other Android skins obviously.

Whatever it’s originality, the fact it’s there is definitely a step in the right direction. The 3 stage gesture controls are the bottom are definitely welcome for ease of use, the middle to unlock, left to go straight to the Dialler, and right to launch the Camera … simple!

You’ll likely notice on the Lock Screen images, the word “HOME” at the top, well that’s a User Account, tapping that will either allow you to switch Accounts (previously only on Android tablets), or put your device in Guest mode. Whilst this feature is likely not going to be used on a Smartphone, it is a nice ‘just in case’ thing you can do should you be one of those not trusting types.

Of course Actionable Notifications have been in Android almost since day 1, but it is funny to see such basic features as Banner and visible Lock Screen Notifications take so long to come to stock Android, which is especially true after Google shared the following image (left) basically portraying all the bases covered at this years I/O. 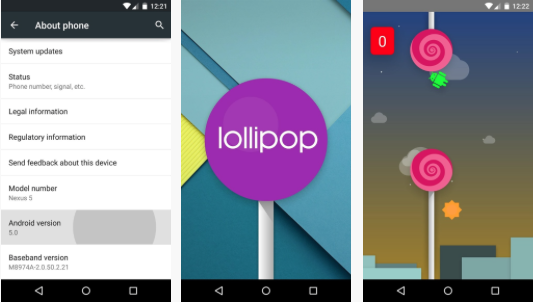 Android has had some rather fun Easter Eggs in it’s time, admittedly KitKat had the worst one, but Google have stepped things up in Android Lollipop with what can only be described as a lollipop themed Flappy Bird. If you find yourself that enticed to play a game on your new Android 5.0 Lollipop device, whether stock or otherwise, give that version number a few taps, tap and hold on the Lollipop and have a good stress game.

And back to where our discussion began, the design of Android 5.0 Lollipop, which of course is the Material Design. Even if you’re not running Android Lollipop just yet, even as far back as Ice Cream Sandwich, you’ve access to a ton of Google’s new apps which have adopted the new Design standard, from Chrome, to all the Play applications, even iOS is getting a bit of Material Design action from Google, so you’re likely very used to it and already have you’re impression of it, but how is it throughout the OS?

Well, in an attempt to cover the basics, here are typical scenarios you’ll enter throughout Lollipop, which aren’t available already to test, these include Settings, Dialler and Call application, Multitasking, Calculator and the Clock app.

Yeah, when we said ‘aesthetically brighter’ at the start of this post, we weren’t lying. The bright pastel colour scheme of Google’s new Material Design approach really has been what can only be described as a marmite experience. On one end, you’ve the Google fanboys who will love it no matter what, to those who simply do like it, then you’ve those who absolutely can’t stand it and want the remaining aspects of the old Roboto interface as much as possible … count us in that listing. The UI just looks cheap and it’s something we unfortunately can’t ignore.

Luckily for us, and maybe you too, who think the UI is a bit … off, OEMs out there maybe, for once, your beacon of hope with what they do with their Skins surrounding Lollipop. We’ve already seen both the Korean giants take on Lollipop (LG and Samsung), who are taking the more Stock approach, but we’ll be very interested to see HTC’s, as well as Sony’s, take on it will be, time will tell.

Of course, Android does give the option of using third party launchers so all is not lost, but minus a few titbits, we’re very disappointed with Android Lollipop, it has to be said. Of course for Developers it’s a massive step in the right direction and we’re looking forward to the results of all that, but as a user, I’m no fan at all.