Whilst Apple couldn’t provide an Event this March for obvious reasons, Apple did provide a website refresh as part of some of the updates they have provided. Amongst these was an update to the iPad Pro, but in this we’re going to focus on the Mac updates that Apple have provided.

Apple have actually provided a fairly decent update to the MacBook Air, updated now with 10th-generation Intel Core CPUs, and probably much more welcome, the replacement of the much hated Butterfly mechanism with the “Magic keyboard” which uses the more conventional Scissor switches.

One great thing about the MacBook Air finally moving up to the latest generation of Intel processors, skipping 9th-generation meaning the improvement differences will be fairly drastic, in some cases improvements of 76% specially in the Graphics department where the MacBook Air is actually able to do something even the current iMac Pro cannot, and that’s drive an Apple Pro Display XDR at full 6K Resolution. Granted, no one in the target market for a MacBook Air will own a Pro Display XDR, but it says a lot when a MacBook Air is able to drive a Display, that an iMac Pro cannot do with dedicated AMD Vega graphics, although that just further reiterates the sheer need for Apple to provide more Navi Graphics options to their Desktop line.

The new MacBook Air also has the option to, for the first time, bump up to a Quad-Core CPU for the first time, this is the case with the upper base model or the custom Core i7 model. Thanks to this, the MacBook Air is now actually more faster in every way than the current 13-inch MacBook Pro, which is actually kinda wild. Granted, we’re expecting Apple to update that shortly, but it’s now a much more powerful and more portable machine from Apple. 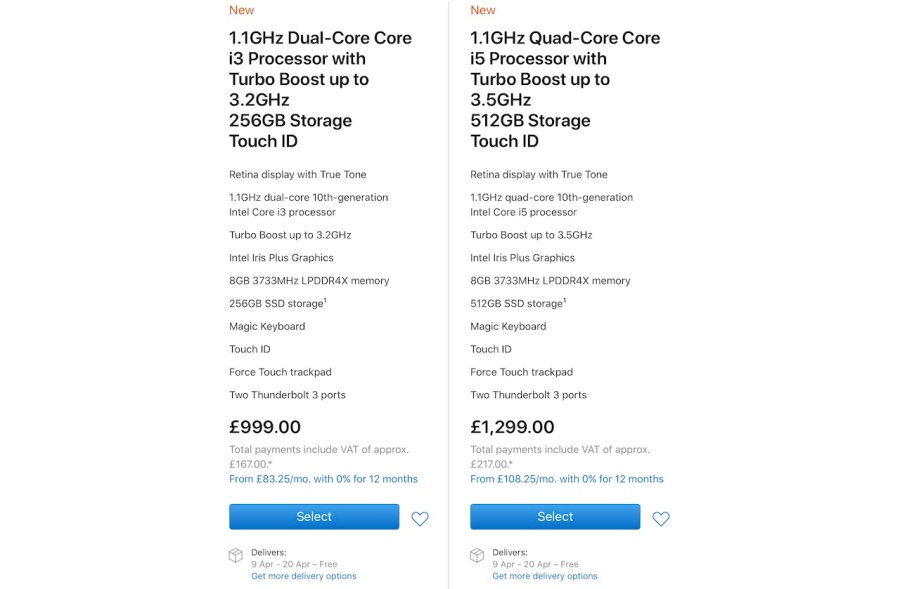 Outside of the internal bump to the CPU, Apple have also doubled the storage capacity and price, now starting at a slightly lower £999 for, granted still a Core i3, but one faster than last generations i5, with a much better 256GB option. Though, we think the £1,299 Quad-Core Core i5 option with 512GB is most definitely the best option Apple sell of this one, and would be the better buy until Apple update the MacBook Pro 13 inch.

Other than all those things, however, everything else remains the same, which is both good and bad. On one hand it’s great that the MacBook Air retains it’s portability and no one can deny it’s not a premium built and looking device, however there’s no updates to the Display, which sure is Retina but not colour accurate, the webcam is a 720p Camera which certainly doesn’t look it.

Mac mini … this one’s a stretch

I would love to tell you that Apple have continued to show their commitment to the Mac mini, offering a favourable update to keep it going, and whilst you will see the “New” tab on it, stating this is a new machine is quite frankly a joke.

Apple also provided a pathetic update to the Mac mini, as in they doubled the default base Storage configurations … that’s it. That’s the update. Apple could have updated the Mac mini with updated 10th-generation Intel CPUs, but they didn’t and it stands with it’s pretty mediocre 8th-generation Core i3 base and more. Hopefully it won’t be the near eternity until we get an actual update on this one.