We are massive fans of Microsoft’s Surface line of devices, we were one of the first to check them out back with the original Surface Pro with it’s meagre 4 hours of *maybe* battery life, so when Microsoft announces a Surface Event we know there’s going to be a ton of good. Whilst that wasn’t far from the truth this Event either, more on those announcements another time, Microsoft did announce a couple of things which we’re not too fond of.

The devices in question aren’t even going to be available this year, in fact not even this time next year, we’re talking “Holiday 2020”, so you can take that as you were. One of the big issues we have with the two devices announced is that they are not foldable devices, they are 2 in 1 devices shrunk down, so we find it fairly hilarious for Microsoft of all companies to state as such, when Windows devices such as Lenovo’s Yoga line, inspired practically by the Surface and Windows 8 story, started the same concept off!

Design wise, they’re pretty much the same, but the aim of them is fairly different. Called the Surface Neo and the Surface Duo, these two devices are Microsofts aim at the smaller Tablet and even Smartphone concept. With a 360 hinge, the devices are able to naturally conform to multiple form factors, but they also reveal how limited they are in what they presume to be able to achieve. 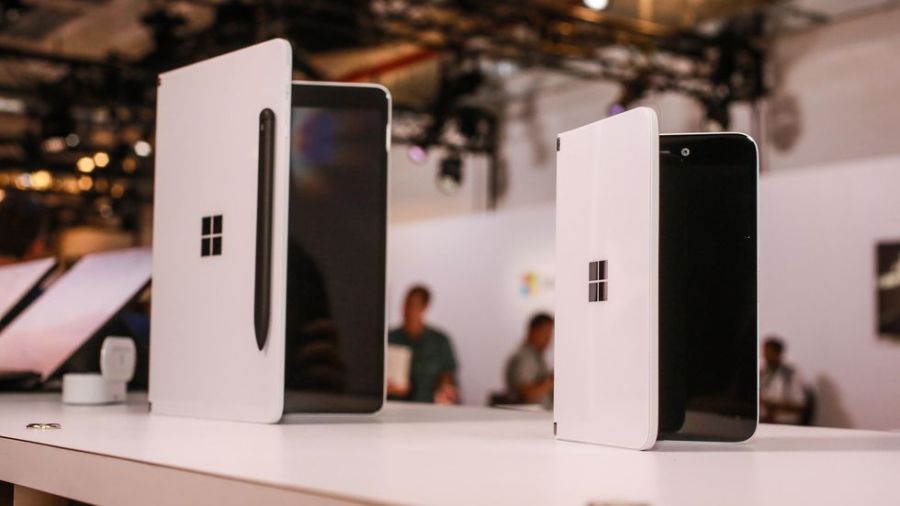 Looking at the design of the two devices also creates a problem in our opinion, they barely look acceptable in 2019, so it’s going to be quite the challenge we’d expect for Microsoft to seriously push these devices in the Holiday of 2020 … but they’re gonna give it a go.

One thing we seriously don’t understand in relation to these two devices is how positively they’re generally being received, we’re fairly amazed by this as the original Surface Pro devices which were actually really good, ended up with bad press, who knew eh?

Looking at these more closely, we’re certainly trying to like what we see, but we’ll let you naturally leave judgement;

The Surface Neo, at a stretch, is probably the more acceptable one of the two, being a dual-Display 360 folding Tablet with some pretty awesome extra tricks such as the Keyboard, which actually attaches magnetically then through software is automatically working integrated. On all the demonstrations we’ve seen the device seems actually fairly decent to use, however this will be running Windows 10 X, a more lite version of Windows 10 … and we all know how well those go, though the real point we’re making for this, is that Windows 10 X isn’t ready just yet.

This is actually probably one of the more acceptable reasons why any of these devices won’t see the light of day until 2020, other than their impracticality, but for the Neo it is a tad disappointing as this is one of the devices we can see a future where this could be done right. The device is expected to feature LTE connectivity for browsing on the go and run on a custom Intel processor.

Spec wise the Surface Neo operates via two 9 inch displays operating at a 4:3 resolution, which whilst look like great displays, something typical for all Surface devices, we just can’t help wondering how those bezels at top and bottom are going to age even more in a year, considering we are ALREADY pulling those faces at it. On the Tablet, it won’t be quite as noticeable, but on a phone things will definitely be more so! …speaking of which;

This is the mythical, the unbelievable, the unbelievable, the some thought would never happen, Surface Phone…kinda. This is the Surface Duo, and it’s the first Surface product in history we have a serious problem with in practically all areas! It’s also the first we’ve seen that’s illogical, poorly designed, looks like it’s not been thought through and overall one which guarantees a poor user experience.

Whilst it’s nice to see Microsoft venture out with a true Android device, which this is by the way, and will include all Android apps support, Play Store and all, with Microsoft tweaks to make it feel very Windows, the end result just doesn’t seem good enough. The Surface Duo also won’t amaze with any 5G goodness either, packing LTE on launch and running what is expected to be the latest generation of Qualcomm hardware at the time; it was specified by Microsoft, that whilst demo units naturally had an 855, that wouldn’t be the processor running on the final release version.

The design of the Duo is more or less the same as the Neo, we’re talking slightly smaller 7 inch screens, which includes that very large top and bottom bezel, with a display all from left to right, separated only in the middle by the hinge used for the 360 rotation. The 360 rotation is slightly more useful on a Smartphone device as it’s fair that you’d hardly want to take a call with it open, we don’t want to look like we’re using an N-Gage or something, but it’s still incredibly bulky and thick in certain areas.

We’re still to post our thoughts about the other updates announced such as the Surface Pro, Surface Laptop 3 13 inch and new AMD Ryzen powered 15 inch version, as well as the new Surface Pro X, but let it be known we’re very impressed with those, which is why we almost felt it necessary to state our disappointment with these, essentially concept devices shown off.

Whilst it’s clear some people are looking at these in awe, it’s clear to us it’s the same people who look at a collection of technology, they don’t squint and notice the issues, and then look again once the shiny lights of announcement disappear. These devices will fail, especially the Duo as it is flawed from Day 0, and you can’t be releasing something like that. The annoying thing is, we were so ready for a Surface phone, and we do think most peoples impressions are clouded by that similar feeling, but we have to point out what to us is obvious, that both the Neo and Duo are missteps by Microsoft! …but at least they’re not Kin