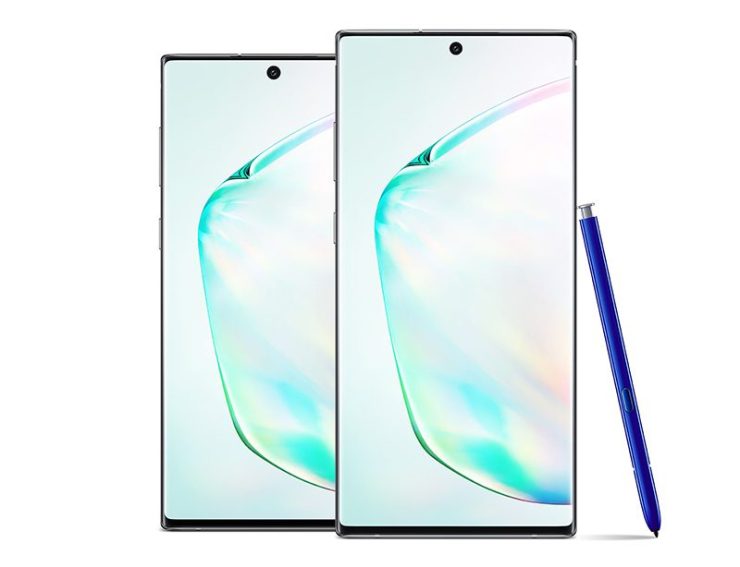 Here it is, Samsung have finally announced the Galaxy Note 10, or should we say they’ve announced a pair of Galaxy Note 10 devices, as this is the first Galaxy Note device with two size options. The Note 10 devices are naturally packed to the punch with the latest specifications and feature the closest Samsung has got to a truly bezel-less display, though the obvious chin still bothers us, like it always does.

The base Note 10 device features a 6.3 inch AMOLED “Cinematic Infinity Display”, but if that’s clearly too small for you, there’s now a Galaxy Note 10+ featuring a 6.8 inch AMOLED “Cinematic Infinity Display”. What’s disappointing about the Note 10 is when you look at the base Note 10, the 6.3 inch display is 2280 x 1080, yes it’s literally a Full HD display at 6.3 inches … which for Samsung, just seems incredibly disappointing. If you do want to step things up to a more traditional resolution, you can get a more Samsung like resolution on the 6.8 inch display with a 3040 x 1440 display. As is the thing with Samsung phones now, the device has a Hole Punch Camera at the front, though now in a much better place, top and centre.

One thing you won’t find on the Galaxy Note 10 is a Headphone Jack … I know Samsung too, though it’s worth noting the Galaxy Fold didn’t have one either. Authentication is done on the Note 10 via a fairly insecure facial recognition or the in-display Fingerprint scanner

The Galaxy Note 10 devices naturally feature the S-pen, which does a bunch of things which the average users will use for at least, maybe, a month. Sorry, we know some like it, but it’s definitely a minor feature.

The devices are equipped with 7-nanometer 64-bit Octa-core processors, though disappointingly the base and plus models have different specs, which we’re not a fan of, the base Note 10 features 8GB RAM and 256GB of internal storage, whereas Note 10+ features 12GB RAM and up to 512GB internal storage. To maintain performance, Samsung claim the Note 10 devices feature “the world’s slimmest vapour chamber cooling system”.