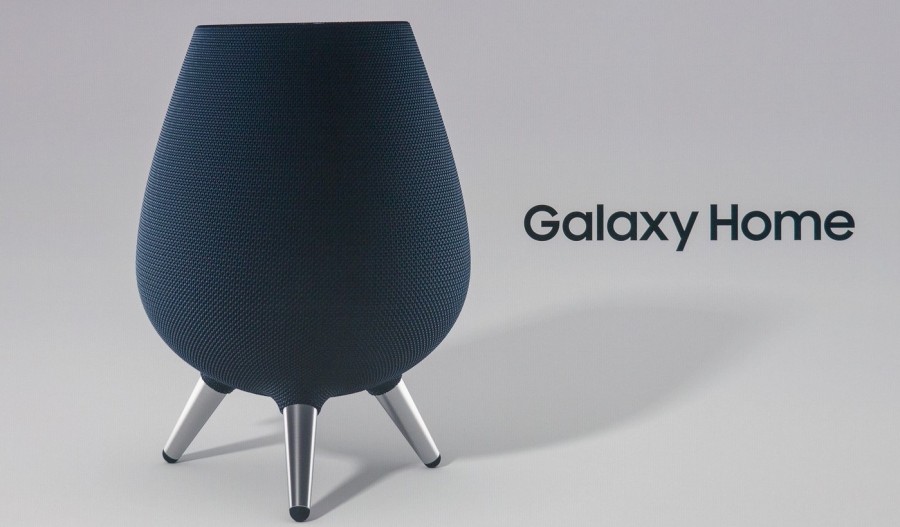 Was only a matter of time, and, today, it happened, this is Samsung’s Smart Speaker, the Galaxy Home. Powered by Bixby, which probably will put most off instantly, the Galaxy Home seems to have been designed by a few fired employees at IKEA, but we digress. We’re trying not to mock, but look at this thing. Many mocked the HomePod for looking like a stale trash can, but this just looks like an obscure chair.

The Galaxy Home joins a pretty established market in the Smart Speaker space, with Apple barely making an impact whilst Google and especially Amazon rule the space. The problem for Samsung is there’s a reason for why that is, and why we said them in that order, they’re actually good at virtual assistants, Bixby … let’s just say, has a few issues. Now, we’re not talking about the 15 second delay oops at the keynote, but didn’t help, it’s just that Bixby has had a consistent history of promising more and delivering less, at least with Siri you know you’re getting less but you get it fast, as for Bixby versus Google or Amazon, it starts to look pretty bad.

Unlike most Smart Speakers, Samsung gave their Galaxy Home legs, which remind us of those cheap touchscreen stylus you used to see, and a fabric coating around the Speaker, akin to HomePod, with a singular wire to power the AKG powered Speaker array. The speaker also has 8 microphones to allow voice detection from afar, so when you say “Hi Bixby”, it should, in theory, hear you and deliver your command, whether thats for basics such as Weather or from any SmartThings command.

On the audio front, Samsung don’t have a music service, unlike all of the major competitors in this field, so they’ve partnered with Spotify instead to deliver the music and offer seamless integration from the Spotify app to the Galaxy Home. It’s unclear, as of yet, whether that will be exclusive to just Samsung phones, or Android, we don’t know yet.

One thing that’s disappointing coming from the company still touting headphone jacks on their Smartphones, the Galaxy Home does not have aux input, which is quite surprising from Samsung.

As for everything else, that’s all we know. The Galaxy Home was more teased than announced, with an unknown release date, price or anything else, guess we’ll watch this space if you remember it exists when it comes out!