Google IO 2018 has just ended, and as always Google had a lot to talk about at their annual developers conference, but how much actually is relevant and important to you and me, well let’s take a look shall we.

As always, Google showed off their latest efforts in the world of Android, as well as the myriad of Google services, whilst some announcements were quite frankly unimportant to those not in the developer community, a number of announcements we feel deserve a mention, not just because they’re interesting, but in some cases because it’s creepy how close technology is getting … of course this is for our benefit, but still.

Whilst many may have been hoping for a pretty big release from Google this year, that is once again something they won’t find, Android P is looking like yet another safe release from Google, though their are a number of changes, which, for the most part, are for the good.

Do Not Disturb is far more aggressive in Android P. When enabled, notifications will now disappear altogether. The only way an alert will come through is if it’s triggered by a starred contact, and even then it’s restricted to just a phone call. Google also introduced a new Silence mode with Android P, which we think is actually rather dumb, which allows you to instantly Silent your device by placing it flat down. The problem with that, is most people I know place their phone flat normally, and certainly don’t want it auto-silencing.

Android P now features a new Performance Dashboard. This allows you to monitor any apps or services which are running. This allows you to get a better view of what’s taking up all the juice on your device. Should you wish, you can also set restrictions of use through a select app or service.

One change we noticed instantly on the Pixel 2 XL, was the inclusion of a battery percentage on the always-on display, which is something we’re a big fan of, as that’s another glanceable feature which no longer requires you to unlock to see. Speaking of battery, or more status bar features, the position of the time is now on the left of the top status bar, rather than the right with notification icons limited to a certain number. This change is likely due to all the upcoming “notch” devices.

Whilst it’s disabled by default in the early beta releases, Google have announced a whole new way of interacting with the Android P operating system. Gone, or we imagine will be, are the old 3-way navigation button array of ‘back, home, multitasking’, and in with a single pill looking icon, granted the back will still appear, but only if needed.

Home remains unchanged, wherever you are, you can single tap the bottom middle and get yourself back to the home screen.

Back button, may not be showing permanently anymore, but is still there when an app requires it. It will be interesting to see whether this has a future like the old ‘MENU’ button from Android of old. Interestingly the button is now not filled-in like it used to be.

Multitasking, however, is completely overhauled and replaced with a gesture-based system. The way Google have handled multitasking is interesting as anyone who’s used Android Oreo on a Pixel, or another stock-variant device such as an Android One device, will find the new multitasking layout almost accidentally as the gesture is the same as what you used to do to get to the All Apps screen. Speaking of the All Apps screen, to get there now you simply swipe up again after you’re at that screen. Should you want to get to All Apps screen straight away, you can by swiping up all the way to top of the screen in a speedier effort. We’re sure Google will make some tweaks to this prior to launch however.

You can also drag the middle Home button to the right to cycle through the open apps, and between the recent two when fully within an application.

Many people … okay, everyone, is comparing this change to multitasking as an iPhone X copy, here’s our take on that. It’s not a copy, but we think it’s fair to say it’s inspired. Where the iPhone X strives ahead of the way Google have adopted it is swiping between running apps whilst in-app, Google’s is limited to latest two whereas the iPhone X runs through as many as running, but we think both suffer from a learning curve which isn’t always the best for any OS. But, anyone who’s used an iPhone X previous to purchasing an Android P device, should be able to jump right in.

That’s it for Android P … yeah. We meant what we said when we said it was a small release. Google did announce a COLLECTION of changes to some Google services that naturally will be running through Android P, which we’ll get to now.

Google have made a massive push with AI at Google IO 2018, granted they did last year too, but this year it was definitely the hot-word. Google made a collection of announcements and updates to the Google Assistant, including 5 new voices … oddly John Legend, we don’t know why they didn’t try Morgan Freeman either, but a random musician is a slow step to what we’ve all being looking for. But, the biggest update came in the form of what Google are branding, Google Duplex.

Google Duplex is just a phrase behind what Google is calling the major AI features which are growing behind the Google Assistant, and they’re getting creepily good. We recommend you just, if you haven’t seen it, watch the video shown above, it’s a clip from Google IO where it demos two real calls made in the background by the Google Assistant to both a hair salon and a restaurant.

What’s creepy about the whole aspect of the Google Assistant making the phone call naturally is just how convincing it actually seems, it’s clearly fooling a collection of places in many examples. The benefit, you get to be an even bigger lazy ass and have things booked for you, with notifications to confirm, but it really is rather crazy how far these things are going.

It’s worth noting that Google Duplex is still in the internal beta stage, and still has no release date confirmed, but will be coming once the last few things are ironed out. Currently Google is testing the technology on all situations they can, should the call either fail or go to blank, a real advisor will be available to finish the call, naturally logging and fixing what caused the problem.

The thing that worries us about all this, is cold calling. Just think how much this will benefit cold calling companies? We maybe looking at things from the wrong angle, but whenever AI gets to a certain level, it’s going to be exploited and will be interesting to see if that ever happens. 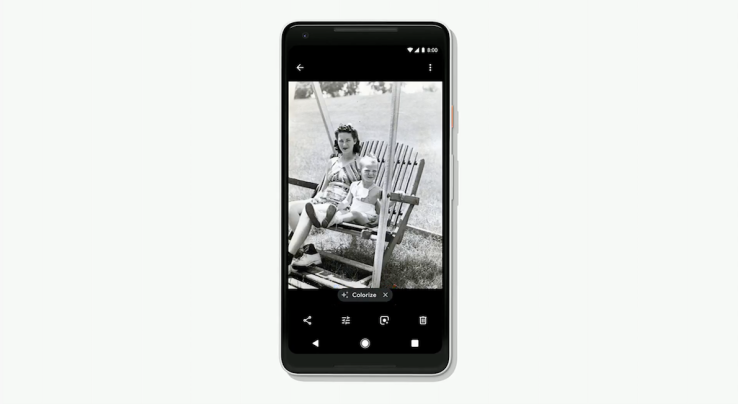 Next to some minor updates, starting with Google Photos. Whilst Google Photos didn’t get that many new features, it did get a few interesting new improvements including the inclusion of Smart Actions which allow you to instantly view a distinguishing view of what’s in the image, who etc and with automatic sorting of that.

One of the most noted feature included Google Photos ability to convert a black and white picture to realistic colour, which is just incredible if that can be done reliably.

Google Photos will also have the ability to recognise documents, including converting them to a useable format such as PDF, again not big features, but a step up for Google Photos. The update is expected to roll out for iOS and Android shortly.

Google also announced a collection of updates to Maps to improve functionality and features coming to the Google Maps. The biggest update Google announced was with an AI focused Maps, shown above, in an AR environment to show you how to get to where you wish to go. Google also had an odd fox which you can use if you get stuck?

The benefit of the new Maps, you can see shops and businesses easily right where they are. The question we have is how it will handle areas with problematic GPS service such as big cities, where Maps is actually needed.

For now, though, this isn’t coming to us just yet and there’s no announcement on when this is other than coming soon, but it’s another pretty big way to use Maps in the future, likely at the expense of battery life.

Google also announced Google News at IO 2018 to a bit of confusion initially, as their was no mention at the time what that would mean to both “News and Weather” on Android, or “Play Newsstand”, thankfully it soon came apparent it was a replacement for both. The big difference with Google News versus what was available through Play Newsstand, is that Google don’t want Google News to just be essentially an RSS viewer, but to be so much more with accessible suggestions based on AI, there’s that hot-word again.

It’s currently unclear how well the AI focus will work, though it’s an interesting move ironically akin to what Apple’s done with Apple News, especially with the “For You” section which reminded us precisely of Apple News … though I imagine Google don’t want the comparison.

And that’s about it. A pretty low-key Google IO this year, but it’s still fair to say that Google did a lot in the background rather than what can be shown as product announcements, though when you look at technology such as that from Google Duplex, it’s clear where Google’s main focuses lie and thanks to such technology it’s going to be an interesting future.

*some images provided by 3rd party sources and may experience content issues in the future and reserved copyright applies to those owners. Google IO footage curtesy of Google Inc. Pixel 2 XL shown provided by Mobile Nations.

Error: Twitter did not respond. Please wait a few minutes and refresh this page.