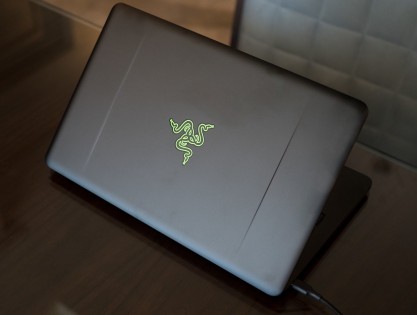 Last year it was a Triple Display Laptop, this year, at CES 2018, Razer are hoping to steal the limelight with a new concept, turning your Smartphone in to a fully fledged Laptop! Sound familiar? It should. Razer aren’t the first, they aren’t the second, third, forth … you get the picture, this has been tried over and over, and has had the same pattern as a result, they’ve failed.

So, what’s different with Razer’s approach? Well … nothing. But, let’s review anyway shall we; 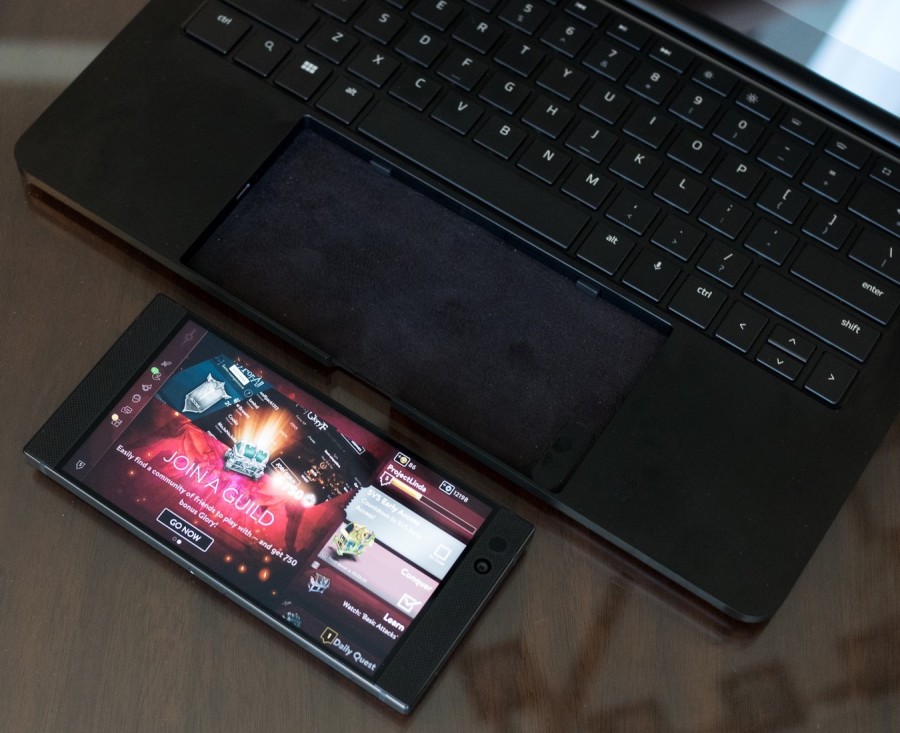 Unlike solutions like Microsoft’s Continuum and Samsung’s DeX, Razer have taken the more traditional approach last attempted by Motorola, building a base for the Smartphone to be placed within, and then once attached, there you go, you’re set up. However, unlike Motorola, Razer know how to make Laptops, and very nice ones as well, so it’s only natural that this Laptop looks incredible! The multi-coloured LEDs on the keyboards are here, a stellar aluminium build is here and a great display to boot, all are here! This thing is actually a Laptop you’d want, regardless of what’s powering it. We’re also a massive fan of the way you connect the Razer Phone to the base, simply place the phone in to the area shown, press a button, and the perfectly aligned USB-C cable and further secure connections connect themselves to the phone, the opposite to detach. It’s simple, and it works, we’re a fan! 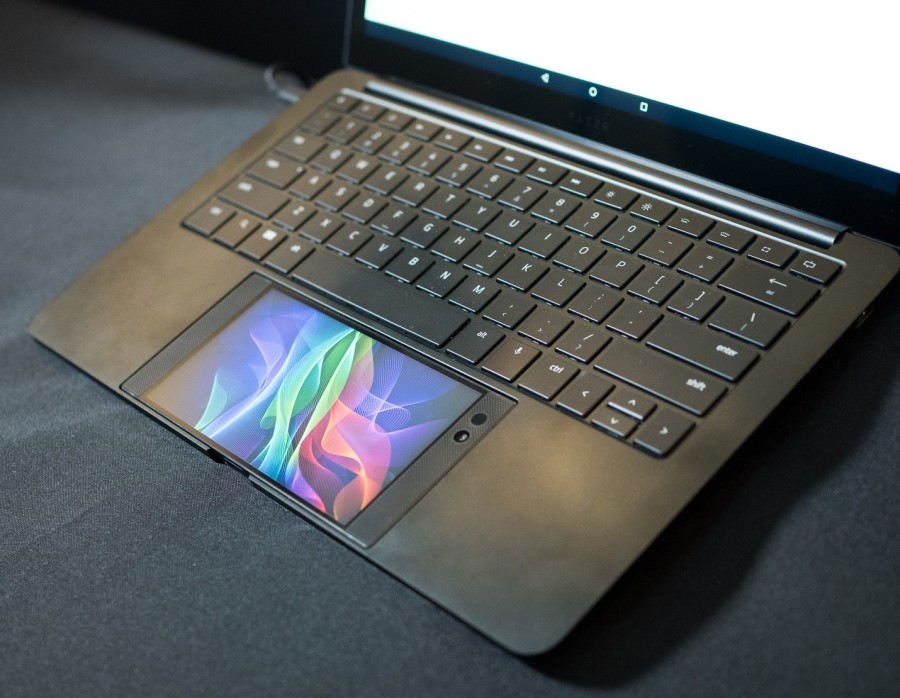 What’s powering the experience? Well, Android. To be more clear, the entire experience is being not only powered by the Razer Phone, but provided through. What this does mean is, for the most part, you’re using an Android tablet with a Keyboard and Mouse, with the Razer Phone itself either acting as the Trackpad or a Secondary Monitor, which can be in some cases cumbersome, but an idea such as this one, with time, we don’t think will be long from being the norm. It is worth noting, as with all Android devices, pairing a Bluetooth Mouse is also an option, and maybe the more preferred route for those expecting to use the unit for a long period of time.

The Laptop base also houses a collection of additions to the experience, an additional of over 200GB of Storage, nice, a USB-C port for both data and charging, nice, a full size USB 3.0 port, very nice, and the very 3.5mm headphone jack lacking from the Razer Phone itself! Speaking of audio, if you were wondering, the Laptop base has no Speakers, but fully utilises the incredible Dolby Speakers from the Razer Phone itself.

As you’d expect, the Laptop base also has it’s own Battery, which is actually quite a decent one, capable of fully charging the Razer Phone nearly 3 times, meaning you’ve not just convenience on the go, you’ve that extra bit of juice as well! 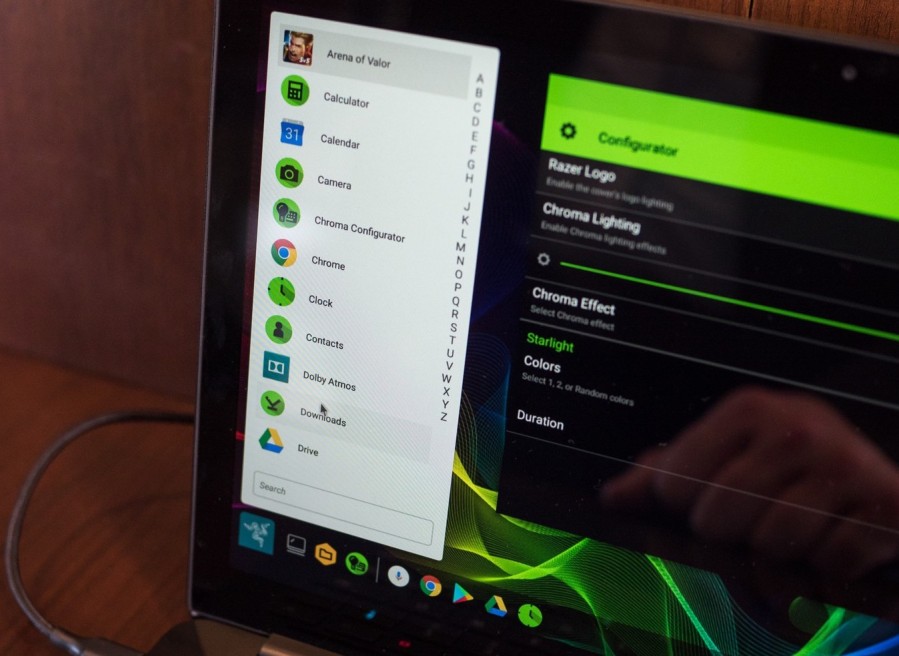 One thing we always love about some products, is how the company goes that extra step to help the experience, and that’s certainly true here as well with Razer, as whilst most of the Android experience remains uncluttered, much like the Razer Phone, it wouldn’t be Razer, if certain things weren’t there, and we don’t just mean the hint of Green.

As we mentioned previously, the full multi-coloured LED keyboard lights have the same level of Chroma Effects found from Razer’s Windows laptops, as well as a nice “Start menu”, if you will, to further aid the Keyboard and Mouse navigation.

Another nice added touch added to the Project Linda Laptop base involves unlocking, and it suddenly becomes even more clearer why the Razer Phone featured a Fingerprint Scanner, not on the front or back, but on the side. With the Razer Phone docked in to place, should you close the Laptop, then open to continue, you can Unlock and get straight back to the experience using the very same Fingerprint Scanner from the Razer Phone, which nips right between a grove provided! Genius.

Is it needed, no. Did anyone ask for it, no. But, one thing you’ve got to give Razer, they gave it a very good go and it’s easily the best incarnation of the idea of using your Phone and your Laptop, which is only natural with Snapdragon 835 Laptops hitting the shelves running full Windows. However, the Razer Phone ‘Project Linda’ fall short of the exact same hurdles we, and we’re betting you, always thought it would, but one thing this does show us, we’re getting closer.