As we’ve gone through again … and again, and most recently again in our Pixel 2 XL Review, Google have had some challenges with early units permitting hardware problems, as well as a collection of software annoyances ruining the otherwise stellar user experience surrounding the new Pixel 2 and Pixel 2 XL.

In our Pixel 2 XL Review, we discussed the collection of popular user reported issues, and, how we actually received a pretty decent unit, not displaying any abnormalities in relation to a severe blue shift (same picture shown above), as well as no early burn-in issues previously reported, which we can vouch even after that review is still not the case, or even slightly.

However, dismissing user issues, just because your device doesn’t experience them isn’t exactly the right thing to do, though we will say this, most, if not all, are fixed in the November Update, and in newer shipments!

We’ve a video at the bottom of this post, by ThisIsTechToday, who does a fantastic job at highlighting the fixes present in this update, but for now, we’re going to run over them here!

Again, whilst we didn’t notice any abnormal Audio in our Video recording tests, most people did. The problems arose around whenever users would record Audio, their would be a static sound presented to the resulting Video. It was noted later, that this was due to an imbalance surrounding the software controlling noise cancellation! This makes sense, as when the microphone is used for Phone calls, it sounds perfectly fine at the other end.

Well, when comparing a Pixel 2 XL with the issue, which is the majority, before and after the update, the results are striking and instant. The microphone audio now sounds, honestly, just like it should, and like it did on the previous Pixel devices. The recording is still Mono, for whatever reason, was on the previous Pixel, and is on all iPhones, but still, the sound is now crisp and more than usable!

INTERESTING NOTE: Whilst you can now use Bluetooth microphones to record Audio on Videos in the built in Camera app, wired microphones continue to not work, though third party solutions continue to.

Many Pixel 2 XL users were also experiencing some Touch issues at the direct edges of the display, likely the area of the display in which is curved. Well, that’s been fixed as well. When using a display tester, it’s clear that all taps, or swipes at the edges are now correctly registering post-update, compared to pre-update, whether that be current release, or Developer Preview 1. 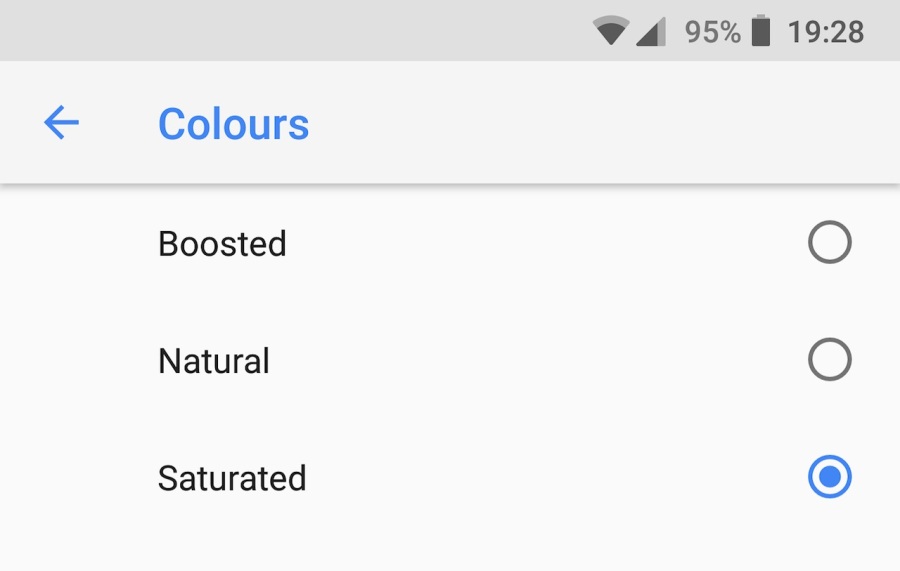 For those running the Android Oreo Developer Preview, the way the release cycle works meant users didn’t actually get the new Colour Profiles that were added in the November Security Update. Well, now they’re here, and users will be able to test the display and see which of the new Colours they prefer in the same three options.

Google have previously mentioned they will be continuing to improve this over time in the December Update, as well.

This is looking more like an actual hardware issue, than software. As we mentioned in our Pixel 2 XL Review, we actually don’t seem to have this issue, after the continuous testing we’ve done with low brightness, but we know many with older units do. Should this issue bother you, just like Blue Shift, we recommend getting a replacement.

For those who don’t know, both the Pixel 2 and the Pixel 2 XL actually have a built in processor, currently unused, made by Google (for real this time), called the Pixel Visual Core. What this Core allows, is for Pixel 2 and Pixel 2 XL devices to pre and post-process Photos in almost an instant, especially in relation to HDR+, which is enabled by default on Pixel devices.

Whilst taking pictures on the Pixel 2 XL is still really fast, this is going to make it even faster! Whilst this update doesn’t fully enable the Pixel Visual Core, it’s clear that we are getting ever so close until it will. Has to be said, it’s pretty exciting to have a Smartphone that you know is going to be faster going forward, as even this early stages “Camera HAL HDR+” option you can find in Developer Options, it’s already quicker!

And that’s about it, for now. For a full visual run through of all the additions, check out this great video by ThisIsTechToday, covering the new update versus the old. It’s worth noting, his Pixel 2 XL units do have both the Microphone and Black Crush issue ours doesn’t, which should help for those who also have those issues, especially the Microphone one as it shows the difference between the update and how it fixes those problems!

THIS IS TECH TODAY

Video provided by This is Tech Today on YouTube.