Kicked off by the LG G6, it’s clear that 2017 is the year of the reduction in bezels on Smartphones, though when it comes to Samsung this has been a much more obvious step in light of the companies prior Edge devices. Unlike the G6, though like Samsung’s previous Edge devices, the display doesn’t just fill top to bottom, but also on the sides which presents itself as a great or terrible design choice. Great because it’s undeniable how awesome it looks, but bad as Samsung historically have had terrible accidental touch protection on their Edge devices.

One thing you likely won’t do in terms of the Galaxy S8 display however, it complain too much about how it looks, you’ve a 5.8 inch display on the Galaxy S8, and 6.2 inch on the Galaxy S8+ variant, however that display is compacted in a way that on a physical level, you shouldn’t be able to tell the difference between the size of the 5.1 inch Galaxy S7 or the S7 Edge, though it is still slightly bigger. Samsung brand these their Infinity Displays. The displays aren’t 16.9 however, so you will get some letter boxing, at least until Apps get optimised, a problem with the G6 right now, however it’s also not 2:3, it’s an odd resolution, keeping the 1440p of 2K however stretching to 2960 x 1440, which brings 570ppi on the S8, and 529ppi on the S8+. That display is also HDR+, so you should in theory see much more accuracy in colours, though Samsung’s over saturation will also remain as that’s their thing.

The Galaxy S8 will of course be the first, by availability, device with the new Qualcomm SnapDragon 835, though us UK folks ain’t getting it, we’re getting the new Exynos 8895, and whilst that used to be a massive flash point to strike at the US markets with the Snapdragon, the differences are much more scarce than normal, most importantly due to the fact Samsung actually aided Qualcomm on the 835, hens the initial exclusivity. Performance is top notch by numbers, waving goodbye to all prior Android devices in their wake, though when it comes to versus iPhone 7, Apple still have a very big winner in terms of Single Core results and remain surprisingly close despite half the number of processing Cores (counting the two high performance versus Quad-Core 835/8895).

The Galaxy S8 will be the first major Samsung device without a physical home-button, meaning all three navigation buttons are now within the display, however Samsung know that users do like the feel of a physical feel, so Samsung have taken a pager out of the iPhone 7, by including a 3D Touch-esc physical feel to the navigation buttons. For the moment, that is only on the navigation buttons but it’s a good start. Also, if you’ve always been annoyed of Samsung’s placement of the Back button, you can finally swap it around. The Home button will also remain on as part of the Always on Display, so you’ll always be able to find the button. 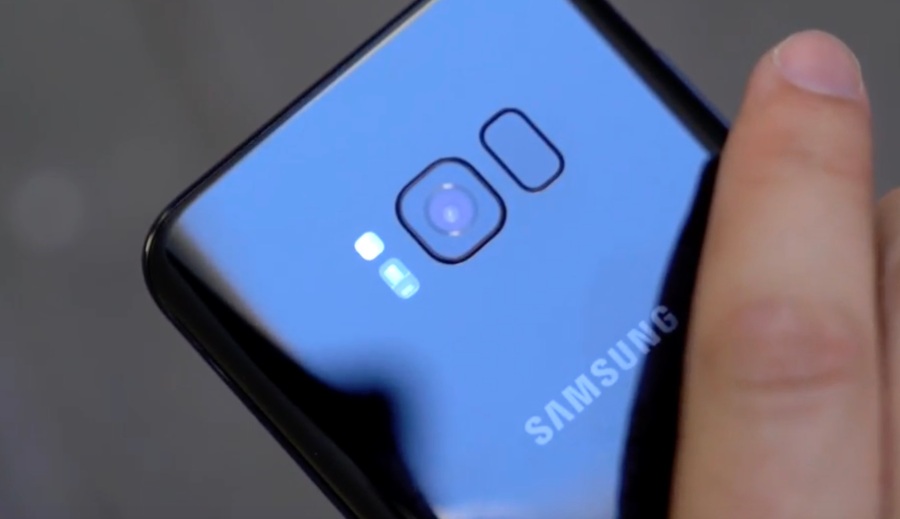 The feature that really takes the cake, is that dang Fingerprint scanner. Not only is it on the back, but as leaks entailed, it’s in the worst place in the world, to the right of the Camera, There’s no telling how often you’ll be pressing on the 12MP Dual-Pixel Camera, there’s also an 8MP Front Camera if you were wondering, or the Dual-Flash trying just to unlock your device! Thankfully Samsung have implemented a long welcomed feature from the Galaxy Note 7, no not fires, but the Iris scanner, which works better than ever. Still, being an Iris scanner does mean lighting plays a bit part, but in terms of comparison against other Iris scanning devices, this works very well.

Samsung have taken a page out of LGs book with the Galaxy S8 supporting a high quality DAC as well as throwing in a pair of high quality AKG earphones, this is an awesome move on Samsung’s part, especially as Audio quality in Smartphones has definitely taken a slip in terms of Audio quality via the built in DACs, or even through Apple’s Lighting adapter. Both the S8 and S8+ feature a 32-bit PCM DAC supporting DSD64/128 playback support, essentially meaning you can play lossless audio and hear every decibel. Naturally this is likely nothing to most consumers, but if you’re an Audiophile, this is your handset.

Oddly Samsung have paired with Google Play Music to give users a beneficial Trial, which is great don’t get us wrong, but Play Music doesn’t offer the higher quality streaming which you’d of thought would have been best to promote the DAC?!

One thing you won’t find on the Galaxy S8, front firing Speakers and we honestly don’t know why. Once again you’re left with a terrible tweeter at the bottom which is very annoying as you’ve this incredible Display, yet Speakers that make you almost not want to consume content on it. Yes we know, the high quality DACs, but come on, would it hurt to add another Speaker?!

Naturally one area of the Galaxy S8 devices Samsung wanted to do the most iteration was the battery. Oh boy, if there’s one thing Samsung would not want, it’s another battery issue. The company was loud and clear at confirming the Galaxy S8 followed their new test regime, though unfortunately they did act a bit more conservative in the capacity, which has taken a slight dip in terms of Capacity, now at 3,000mAh or 3,500mAh for the S8+. Naturally Wireless Charging and Quick Charging remain so maybe it won’t be too bad, though for the new larger display, a bigger battery could be a big miss.

You knew this was coming, but it’s true. Whilst we highly welcome the vast clean-up Samsung have brought to the Android experience, loving the wire-frame look with Nougat, which should see it’s way on Galaxy S7 devices in around 6 months, but this is Samsung, they can’t resist a gimmick or two, and theses are the latest; 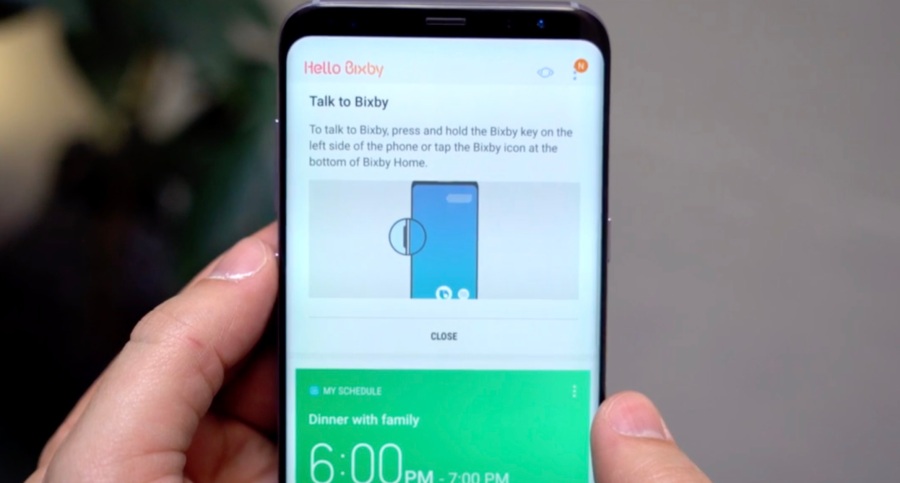 Samsung have introduced a new Virtual Assistant to compete with Siri or Cortana. Whilst you can still use the Google Assistant, as this is a Nougat device, Bixby is Samsung’s second major attempt at making a usable Voice Assistant after the failings of S-Voice. The left page on the Home screen will default to Bixby, and it has it’s own button should you ever need it. The interface layers the latest chosen topics of interest just like Cortana and Google Now, though it remains to be seen how it will fair in real world voice use. 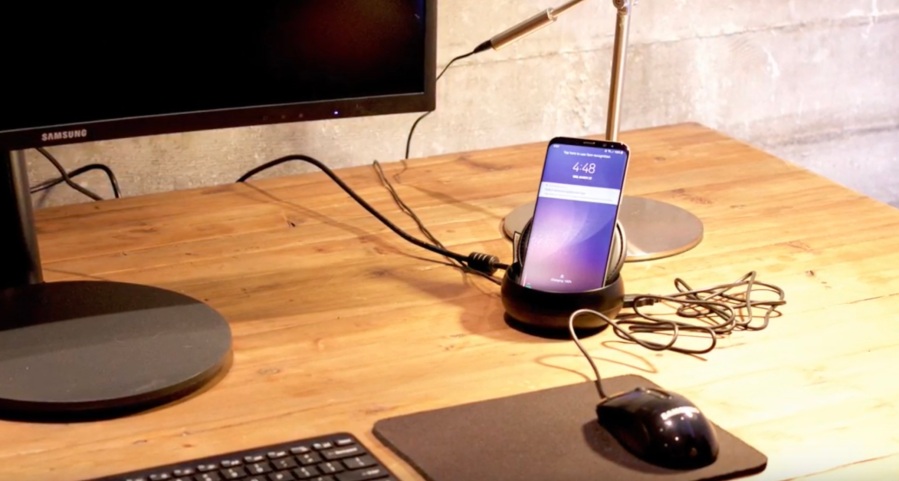 First Motorola tried it and failed, Microsoft still has it under Continuum, seems every company is determined to make your device become a PC, Samsung’s effort is DeX. It works more or less the same as Continuum in that you place your Smartphone in to a pre-defined USB-C dock, then thanks to HDMI and Bluetooth pair a Display, Keyboard and Mouse, and boom you’ve a Computer … in theory. As you expect, support for DeX is limited at best, we’re talking Stock apps at best, though Samsung have partnered with a number of companies to bring more experiences to this, ironically including Microsoft so you can run Office just like you can through Continuum on your Galaxy S8. Trouble is, everyones tried this, and everyone has failed, so it begs to see whether Samsung will succeed, though we’re seeing little to no evidence of that here with DeX. Samsung were suspciously quiet about the price of the DeX Dock, that’s never a good sign.

Whilst Samsung did introduce a high quality 8MP Front Camera with the usual Wide Angle tricks you’d expect from a phone in the Selfie age, the rear Camera on the Galaxy S8 and Galaxy S8+ is a 12MP Rear Camera which may sound familiar … and it should, because it’s not only the same Camera they put in the ill-fated Note 7, but it’s also the same Camera found in the previous Galaxy S7! No, seriously, it’s the same Camera.

Samsung are hoping you won’t notice this thanks to some software changes made to improve the processing, which begs the question as to whether that could mean the Camera on the Galaxy S7 itself could get improved after an update. This is kind of disappointing from Samsung, as whilst the Galaxy S7 was one of our favourite shooters at the start of 2016, it’s dated now compared to devices which followed so time will tell on this one.

Samsung have also introduced a new Smart Switch app, which should allow you to transfer items between your previous Smartphone, however this will be a limited to Samsung and only “select” other devices, which in itself grants this a poor feature. What we’d recommend if you’re switching to the Galaxy S8, or any phone by that matter, is back up using Google’s services you’ll ease all this worry.

The Galaxy S8 and Galaxy S8+ go on sale on April 19th, however Samsung (and specified retailers and Carriers) do have a special pre-order special, where you could receive your Galaxy S8 up to 8 days earlier, though this is dependent naturally on Stock, which we think will be quite the risk, so don’t rely on that, but a great perk if you do get it earlier.

You’ll definitely need to clear out your change however as easily our least favourite and most surprising feature of the Galaxy S8 is the price, the device will cost you £689 either in the Midnight Black, or Orchid Grey finish, that goes up to £779 on a Galaxy S8+ … that’s a very expensive starting price for a device with 64GB of storage, but naturally Samsung have added a microSD Card slot within the NANO Sim tray so don’t worry yourself too much about that, though still. Yes this is top spec, but that’s also top buck so definitely check one of theses things out in a Store as this is beyond the price where you can afford not to like it.

What do you think of the Galaxy S8, we’re a combination of impressed yet not, guess that’s the draw with leaks.