With big names like LG out of the way at Mobile World Congress, you’d be forgiven to thinking we were not going to see any hardware announced running Qualcomm’s upcoming Snapdragon 835, but it looks like an unlikely brand is here to change that in Sony.

Sony have announced two phones at Mobile World Congress, the Xperia XZs which honestly is hardly even an update, then the flagship the behemoth that is the Xperia XZ Premium!

Sony were the first company to introduce a 4K Smartphone in the Xperia Z5 Premium, though it’s important to mention that the Z5 Premium ran at 1080p until you played a 4K video within the specified Sony video player, with the Xperia XZ Premium, its all-in at 4K.

Do we need 4K resolution on a Smartphone? Nope. In fact we don’t really need 2K (1440p) as we do on the majority of Android flagships either, and it’s clear that the Xperia XZ Premium is yet another one of those devices that’s gonna have eyes on it from the spec hungry crowd who clearly think of nothing else. That display is also covered by Gorilla Glass 5 for extra protection and comes in at 5.5 inches.

The display itself is based on Sony’s Bravia TV technology and offers 4K HDR technology in to a Smartphone for the very first time. Naturally, to show this off, Sony have partnered with Amazon Prime Video to offer a selection of pre-made 4K HDR content to Xperia XZ Premium customers such as Amazon Originals series, which includes popular content such as The Grand Tour and Sneaky Pete.

But the star of the show with the Xperia XZ Premium, at least to us, is in fact not that display, but the fact it is actually the very first Smartphone publicly announced to be running Qualcomm Snapdragon 835, making it one of the first Smartphones capable of it’s many features, such as 1Gbps LTE performance thanks to the Snapdragon X16 LTE modem … though lets be real, we’re way of Carriers actually being able to deliver on that.

Being a Sony device, and packing the best Qualcomm have to offer, has allowed Sony to pair an Xperia XZ Premium device with a Sony PS4 allowing you to play games from your console on your smartphone, an experience of which we’ll have to wait and see.

You’ll find the usual suspects on the Sony Xperia XZ Premium, which is becoming rarer and rarer these days, such as a USB 3.1 capable USB-C port on the bottom, volume on the side as well as the Power / Lock button which doubles up as a Fingerprint scanner. On the top of the device you will indeed still find a 3.5mm headphone jack as well. 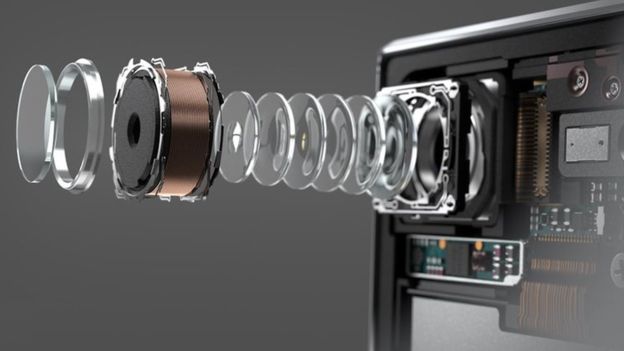 Camera tech is brimming in the Xperia XZ Premium, though this time Sony have opted to slightly reduce the Megapixel count and focus on larger pixels for better low-light performance, which was never much of a strength in Sony’s previous Smartphones. The now 19MP Camera features 19% larger pixels, features a “memory stacked image processor” capable of recording in HD at a rate of a massive 960fps, allowing the device to record Slo-mo over 4 times slower than other Smartphones. 4K recording will also be possible, though its unclear as to whether Sony has opted for 60fps 4K which the 835 is capable of. Sony devices historically haven’t faired well with 4K video recording so we’ll have to see.

On the front of the Xperia XZ Premium you will find a 13MP wide angle Camera which is going to be more than perfect for those Selfies.

The Xperia XZ is of course running the latest Android 7.1.1 Nougat with Sonys custom software on top, which itself is now getting much more cleaner and refined which is great to see. One interesting feature included in all Sony devices seeing a big improvement is what Sony are called Smart Stamina technology, which is set to give much greater battery saving when needed, which is important when you’ve a device powering a full 4K display on the 3230mAh battery.

Other things of note, the device will come with 64GB of internal storage with Card expansion in the same tray as the NANO SIM, IP68 rating remains, and backing up that Snapdragon 835 is a rather conservative 4GB of RAM. 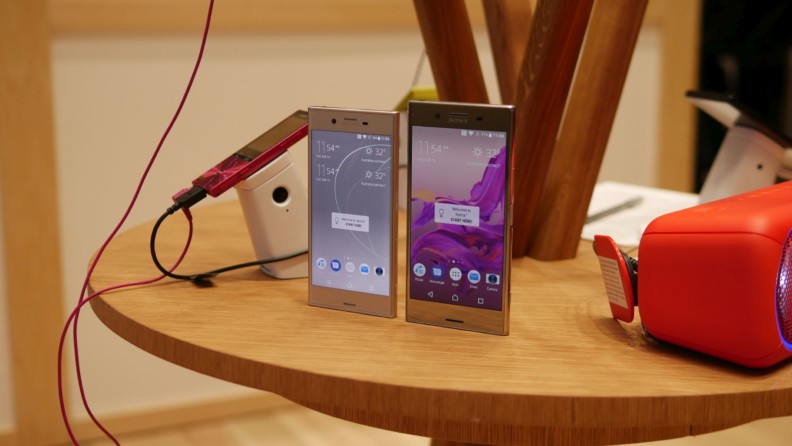 As always Sony did announce two “flagship” devices, and on the left is the smaller 5.2 inch Xperia XZs. The device offers a very small amount of difference over the existing Xperia XZ, but does still feature a few of the big features from the XZ Premium we’ve just talked about.

Main feature carried over to Xperia XZs is the Camera, the same 19MP 4K capable Camera with that insane 960fps Slo-mo video is indeed available on the Xperia XZs as well, though it begs the question how well it will perform given last years Snapdragon 820 will be powering it. The same 13MP wide angle shooter is also available at the front.

The battery is smaller at 2900mAh, but do remember that the Xperia XZs features a 1080p panel so there’s A LOT of saved energy consumption in that alone.

Apart from that however it’s generally the same phone as last years XZ with some added flair. So, literally if the Camera isn’t the main focus for you in getting a new Smartphone, we’d actually suggest saving some and getting last years XZ which is already receiving the Nougat update anyway.