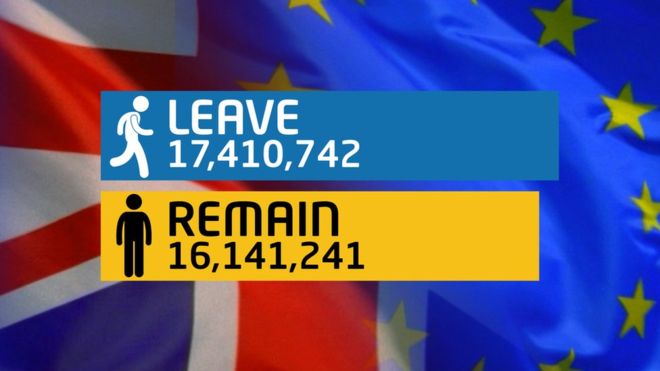 It’s been four years since I’ve posted anything in to ‘Ben’s Blog’, and it’s not really that surprising as, well for one I’ve been busy and two I’ve either had little to nothing to talk about or didn’t want those I’d end up talking about getting back at me as RKUK Media is a little more prominent than it was back then, but something that’s made me put pen to paper so to speak, is the whole Brexit vote and the 51.9% of the U.K. Population who have voted to Leave the European Union.

Don’t worry though, I’m not using this post to blast out a selective of Euro Skeptic or even the latter views upon you, but it’s getting to the point at which it shows just how childish of a nation we really are, and I mean that on a worldwide basis.

The vote was ‘Out’, so deal with it

Probably the biggest annoyance surrounding the Brexit victory in the Referendum, is the massive levels of disgust, attemptive fraudery of the Vote by the ‘In’ Campaign and it just honestly sickens me, for one because we all know that if it was an ‘In’ win then none of this would be happening. No one would be even probably reporting about it now, and it’s easy to see why, put simply mainstream media and the rich who fuel it all wanted a Vote In victory, so they’re going to plaster the world with anything they can to hamper anything it could have stood for.

Whether you have Voted In or Out, it makes little to no difference to me, but the fact is you have to accept that the Public have spoken and instead of pronouncing doom and gloom, actually act upon it to overshadow this one-sided view from the Media. The Media will happily tell you about the shock in the Pound and Sterling falling upon the Vote, but they won’t tell you that Countries such as Germany, United States, as well as others have already publically stated that in a Pro-Brexit future, they will stand by the United Kingdom and actively seek a Trade Deal to prevent any issues with Trade … You’ve probably not heard about that, because showing the possibility or even incling that something the media didn’t want might actually work is just terrible right?

The moaning Voters, many of which never even bothered to!

Then there’s the Vote In voters and didn’t actually vote Voters, who are now claiming their should be a second Referendum Vote as they together feel they could somehow waver the Vote, I’m sorry but COME ON!!! In the last collection of General Elections, you didn’t see people this heavy on Party wins, grow up people seriously. This isn’t me saying the best side has won, this isn’t me saying the worse side has won, this is me saying Out won, so live with it, it happened, so let’s spend less time speaking out of your arse and more times negotiating and making it work! Because, believe it or not, if we act like Adults and start focusing on that, that will in turn bring confidence elsewhere and may (oh just may) start to fuel confidence in investors and in turn the Pound and Sterling will begin to recover too.

PLUS, that same petition calling for a second EU Referendum, you’ve probably seen by now it’s now passed 3 million signatures, very impressive, HOWEVER most aren’t even from the United Kingdom! With some Remain voters actually heading to Social Media to get further Votes, it’s getting pathetic now. Source.

Then the serious anger has to point at Politicians. In a General Election, even if it’s a shock result like ironically the fact that David Cameron got a Conservative win, what happens? I’ll tell you, straight away they get to work on ruling the Country in the way which they feel best fits the people of the UK, regardless on how wrong or right that maybe in the end. So, why the heck are we not doing that now?

Well, instead of Politicians doing what they should be doing and acting upon the People’s wishes and making it work for them, we have loud displays of sour grapes, some saying they’re ‘Angry’ with the UK Public, are you serious? The very people MPs stand to work for, they are now disagreeing with their decisions?

What should be happening is simple, and by the way I’m not saying I’ve not seen any Politicians doing this as I’m thankful I’ve seen a few both In and Out MPs starting to act on the future of this Country rather than wishing to return to the past, but that honestly is what ALL MPs should be doing, it’s not anything other than common sense.

Side note to those who never Voted

This may sound strong, but I mean it, if you never bothered to Vote in the EU Referendum, a one-time opportunity to display your Views on the Countries stand in the European Union, a unique style of Voting where actually every one Vote counted, unlike the Election style of Voting, then how can you rightfully claim any right of an option in this. Although, I must add their was just over 72% turnout for Voting, so it wasn’t like many didn’t, but the ironic thing is the parts of the Country with the least turnout are the ones complaining, such as Scotland, more on that later, but it comes simply down to this, if you didn’t Vote, you’ve little to no right to complain over a victory from either side.

Also, as you can see above, it’s hard to trust mainstream media with even facts these days.

Scotland and the possibility of another Scottish Referendum

It goes without saying that some Politicians are desperate for the limelight and none more so than Nicola Sturgeon, the current Scottish First Minister, a position previously held by Alex Salmond. Both stand for their own party, SNP (Scottish National Party), which ironically have a few things in common with UKIP, in that their main sole purpose is to cause separations across Britian. Well, in light that Scotland was 62% Remain, she is now using this as an easy excuse (one she’s being waiting for since the last Scottish Referendum didn’t work) to call for a second, because the best thing to do to the United Kingdom right now is to affect it’s future uncertainty even more, very clever.

The plan, be it almost as dodgy as others in this Referendum, would be to appeal for Scotland to be part of the EU itself, whereas the rest of Britain go out, only problem with that is both Westminster and the European Union would have to agree to that, Westminster in calling the Referendum and European Union agreeing to comply, which we honestly doubt they would. But, the fact is that even throughout Scotland, it wasn’t with major majority that Remain won either, so it’s silly for Nicola Sturgeon to presume 100% views and go ahead with something Scotland have previously said no to, it’s a joke, even Alex Salmond is on record for saying it wouldn’t be in Scotland’s best interest to have a Second Referendum so soon.

Also, claiming that Northern Ireland feels the same way with Ireland being 55.8% Remain is another stretch in itself as that’s a very short majority in itself, in comparison to much wider majorities across England.

Message to the rest of the world: If you don’t know, shhh.

Stepping outside of the United Kingdom and even Europe at this stage, the reaction outside has probably being more laughable than some of the moaning inside. Probably fuelled by incorrections in the Media, there’s people from as far out as the United States, claiming all sorts of dribble, this is annoying as they’ve no idea of anything to do with being in a Country part of a Union such as Europe and benefits or not of leaving it or being a part of it.

But, the fact of the matter is, that’s just the World that we live in, everyone does a couple of quick Googles, samples the first result, must be true, go by that for the rest of my life, but just reading worldwide posts on this it’s not too hard they’re talking dribbles as like with ours, it’s fuelled by those who wanted In.

The fact of the matter is, the United Kingdom has indeed voted to leave the European Union, it’s been said so it must proceed.

I don’t buy all of this forever doom and gloom, as if we all pulled our socks up and stopped crying in the corner of the room, we’d be perfectly fine. Politicians have a job to do and it’s about time they started doing it.

I also, don’t buy this ‘Regretting my Vote Leave’ rubbish, if you weren’t sure you would have Voted Remain to keep everything as it is. It’s also worth noting that that’s too a Media thing, as a lot of those they choose never even Voted in the first place, which as we said before, grants them no opinion in this.

Look, who knows where this Country will be in, say five years time, one thing we can now say is it will be outside of the European Union, I just wish people would accept that fact and remember that both sides were pledging against the negatives of the other, their were positives in Leaving too, let’s focus on keeping those strong and working together will out way the negatives in probably the same mid-way meh that we were all used to being part of the European Union.