When Apple announced the iPad Pro at their Apple Event last year, the announcement brought great surprise, however did bring some level of disappointment in how Apple approached bringing the “pro” to the iPad. Whilst Apple got a lot of things right, they definitely missed out on a lot of opportunities. From building iOS with help from the healthy iOS developer community, to generally working harder on hardware implementation, their was certainly possibilities there, but that’s not to say everything is wrong, nothing’s perfect and let’s not forget, this is gen 1 after-all.

One thing Apple did get right is input, specifically with the wonderfully named Apple Pencil. The Apple Pencil is a proprietary standard pen input device that works very similar to N-trig styluses in that it requires power to work and features pressure sensitivity input.

The battery however is not a standard A style battery, the Battery is one which can actually be charged through the iPad through a male Lightning cable which is nice, hopefully Apple make an AC adapter for that.

One feature exclusive to the Apple Pencil is the ability to write side-wards and the display can interact differently, however a drawback to the Pencil is the lack of buttons for extra functionality such as an Eraser etc. 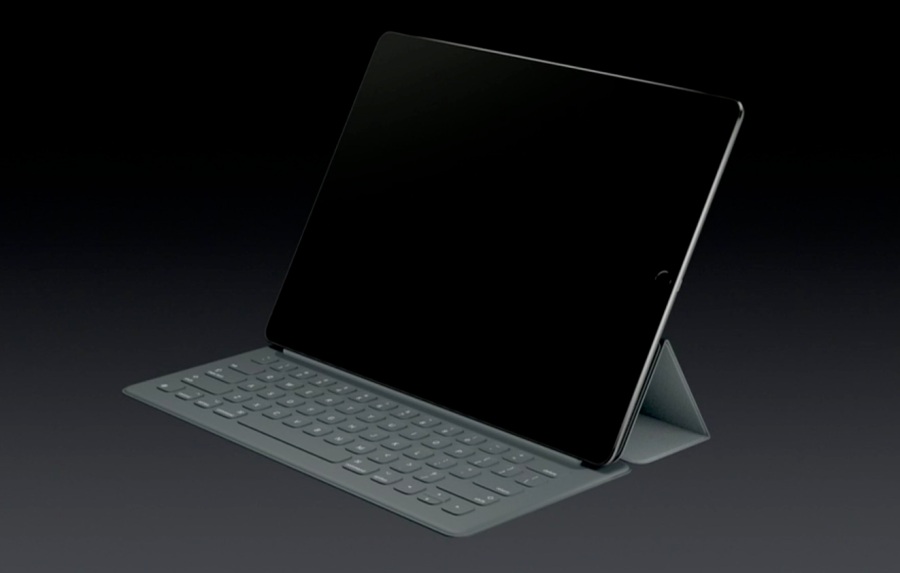 Whilst we admire a company making an effort, in some cases we wish they hadn’t, and that’s certainly true with the ‘Smart Keyboard’.

Even Apple’s own first generation iPad Keyboard Dock has a greater functionality level than what they’ve announced with the Smart Keyboard. This is honestly what we were expecting when Apple said they’d be making a Keyboard for the iPad, a keyboard which mirrors that on Apple’s Wireless Keyboard would be perfect for the iPad Pro, especially when they’re promoting it for being a professional Tablet, especially when we live in a world today with devices such as Microsoft’s Surface Pro 3.

Whilst the iPad Pro does bring some great enhancements compared to the traditional iPad Air and Mini devices, this does come at some cost of keeping the ecosystem consistent, and that’s where we get to Missed Opportunities with the iPad Pro.

Whilst the iPad Pro did introduce some Apps which take full advantage of the iPad Pros larger display form factor, as well as the Apple Pencil, but we don’t think they quite went far enough. Whilst Apple did show off a collection of applications from Microsoft to Adobe, they will also be available on the Air and Mini iPads anyway, so it hardly makes a big impact for the iPad Pro as it’s hardly unique. What Apple should be doing is making iPad Pro exclusives;

Whilst making iPad Pro exclusives may be seen as some as bringing a competitive disadvantage, it would at least give the iPad Pro some purpose. Apps such as a full version of Photoshop for touch, rather than Adobe’s mobile suite, Apple could produce a Logic or Final Cut for iPad, something actually professional for the iPad which would warrant the Pro name. Whilst it would take Apple a long time to do, the only reason I would understand Apple not doing this would be as it may take Customers away from the Mac, but let’s face it, going forward traditional PCs are not going to be anymore for consumers if the current climate is anything to go by.

We’ve spoken briefly in regards to Apple’s design language, but in this case it’s mostly negative. Whilst Apple pride themselves for having a very consistent design language, it does make the iPad Pro look less of a machine than what it actually is, which let’s not forget this is more than Apple’s most powerful Tablet, with benchmarks we’re highly expecting to surpass even Surface Pro 3 levels considering how close the Air 2 was.

We mentioned devices like the Surface Pro 3 earlier, and whilst we don’t really think pitting this device up next to the Surface is a legitimate comparison, one thing the iPad should take from devices like the Surface, is taking advantage of form factor and hardware design to make the device less of a slab form factor. Whilst everyone knows if Apple put a Kickstand on the iPad, it would be instantly marked as a ‘Surface clone’, even though stands on Tablets have existed far before the Surface, it would still be useful and could make the iPad Pro much more attractive for a more imaginative Keyboard accessory, as well as third party ones going forward.

With the iPad Pro, Apple does now have two ports on the iPad, being Lightning and the new Smart Connector, however that’s only suitable for accessories such as Keyboard docks competing with Apple’s own Smart Keyboard mentioned above, however many Customers who will be using the iPad Pro will be wanting to use the device as a way of editing images etc, and the inclusion of an additional port to use would be useful, of course Apple do sell adapters (and third parties) for the iPads which will work on the Pro, but which goes along with that is that iOS only has limited options with input devices, this is what needs changing after putting a ‘Pro’ on a devices name.

Apple have never been known for value for money, but even so when it comes to the iPad Pro starting price of $799 (no UK pricing yet) is definitely an aggressive price, especially when it’s 32GB, thankfully not 16GB though we think 64GB should be the start config to match Surface Pro price *before offers*. But when you look at the fact you can get a 128GB iPad Air 2 with Cellular built in for $50 less than the base iPad Pro, for now it’s definitely a hard device to recommend and price is important.

Let’s just start this by saying, whilst OS X on a Tablet form factor would be nice, let’s be fair it’s far from practical. OS X is not optimized for Tablets in any way, so installing an operating system such as OS X on a Touch only device would be a dreadful experience, casing point being Desktop mode on Windows 8 without the Modern UI to fall back on.

Having said that the functionality of a Desktop UI is really where the iPad Pro should be going, and that is one part of the equation where we agree with the OS X strategy, otherwise where Apple need to go is making the iOS experience better.