Apple have a great platform with iOS, including a range of benefits and advantages over the competition, but one thing which has been quite a struggle to get just right has been Emulators etc remaining available on the platform. Whilst there’s been a range of methods getting such applications on the iOS platform, the official App Store continues to say no, so we’ve been stuck changing Dates back, hoping for an updated version of the app to be available on some source, or last resort being to go ahead and jailbreak.

Whilst all these solutions do the job, they’re far from ideal. Jailbreaking opens up your iOS device to vulrabilities, and the other options are just asking to be patched up by Apple, so both of these are threatened by an update by Apple which you realistically need to keep your system up to date and secure. Thankfully, there’s now a working solution which does the job and is not threatened by an update by Apple be it at a slight cost. 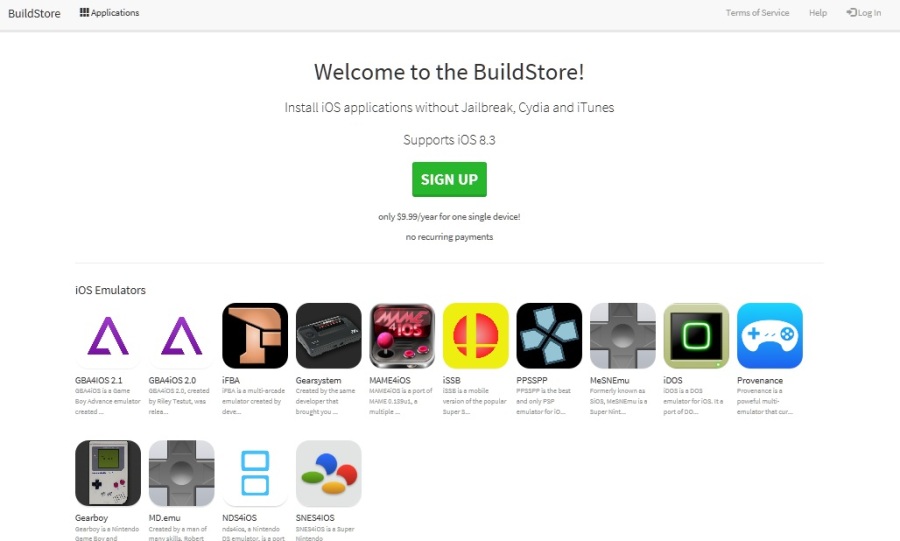 This is BuildStore, available at http://builds.io which offers a range of iOS titles to be downloaded on any version of iOS above iOS 7, and all the way to the latest and next latest version. Unlike previous solutions, this doesn’t just offer the one Emulator or app, this is really a Store collection of titles and offers more or less every Emulator or App you’d want after Jailbreaking or through previous methods, which is perfect. It offers the classic GBA/GB Emulator GBA4iOS, a DS Emulator in NDS4iOS (which could do an update) UPDATE: A newer and better DS Emulator is now available called iNDS, as well as SNES and many more. It also offers a range of Utility apps as well, however we’ve not found most of them that useful, if at all, although we’re expecting a good 95% of people are simply wanting this for the old-school Emulators anyway.

Wouldn’t it be great if everything in the world could be free, unfortunately that is not the case with the BuildStore, it is a straight $9.99 (or £6.49 to us) per year to register a single iOS device UDID to the service, however the process is quick, simple and honestly works like a charm. You don’t need to worry about iTunes, in fact you can use iTunes to import and export from the Emulators should you wish, that is a requirement for the NDS4iOS Emulator for example, but it’s a small gripe to get it on iOS and why we said it was in need of an update.

But, the key with BuildStore is, it’s a working solution with also a very active Twitter base for support and promised support for any time to come as it registers your device to Apple’s developer channel, and thanks to registering a Profile to your UDID instead of borrowing someone elses like previous solutions, there’s no chance of a block which is the main thing in the end.

BuildStore have also recently added tweaked versions of Applications previously unavailable for non-jailbroken devices such as Instagram+, Snapchat+ and Spotify+.