I just want to kick this off with a bit of a thing about Windows RT, we’ve a massive post coming up about Windows RT, but we want to at least briefly clear the air here. Quit the hating. Windows RT in our experience can deliver anything we throw at it, and as far as tablet use goes, we fail to see what everyone is complaining about, all apps we need are there, and if their isn’t one, it has a perfectly capable Web browser with full Flash and HTML5 compatibility, with the ability to Pin website to the Start screen as if it was an app, BBC iPlayer I’m looking at you! If you have been holding off the Surface 2, or RT for that matter, simply because of Windows RT I say stop it, it’s more than capable for the majority of users out there!

Now to the Surface 2. The design of the Surface 2, whilst remains mostly unchanged like the Pro and Pro 2, does feature one big aspect over any other Surface, and that’s the Silver back, which really sets the Surface 2 apart from the others in the line and just looks awesome! Honestly this is the best looking Surface there is. The Surface 2 also feels light in the hand and is super thin, it’s actually just as thin as the USB 3 port is has on the right side, more on ports later. Of course the best way to take Surface design the next step is with a Touch or Type Cover, but this is pure Surface 2 first impressions.

The device also feels great in the hand, in landscape. We don’t recommend anyone uses Windows devices in portrait unless you’re rocking an 8 inch device.

Performance was a key area the Surface RT got the most gripe, whilst most if not all of that was software issues fixed with the 8.1 update, such matters don’t leave the users mind, whether it was the under specced Tegra 3, who knows! With the Surface 2 however, you have a high spec 1.8GHz Quad Core Tegra 4 under the hood, and this delivers the performance you deserve. Games, apps, everything honestly launches just as fast as the Surface Pro 1 we had previously, which we also reviewed here! Honestly, we’re not just saying this performance on the Surface 2 has been pretty much flawless, whether its playing HD games such as RipTide GP 2 to Sparkle 2, to browsing the web, to launching apps like Facebook to Hyper for YouTube, the device just delivers no nonsense, just delvers. The device is also, now with the updated Music and Video apps, a better consumption device, now both the Music and the Video apps allow you to store and access media from a microSD Card using the available slot, meaning even with a 32GB Surface 2, you’ve actually plenty of storage, more on storage in a bit. 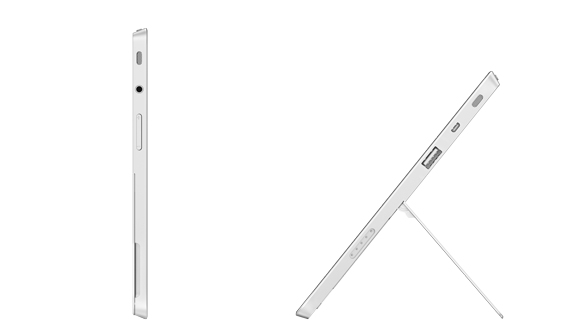 The Surface 2 actually has a very wide array of ports on it, which its better just to list what you’re seeing from top to bottom;

As you can see from the image on Ports, the Surface 2 has an extended position on top of the, what’s claimed to be but isn’t, original position. You can also alternate between the two positions, although we think most users will be using the 40% further out position that’s new to the Surface 2, rather than the 25% out position, which is actually 5% less than the original 30% position on the Surface RT and Pro 1.

We have a 32GB Surface 2, and are very happy with it, so what does that say. You can also increase your storage by 4GB or 8GB if you have a Surface Pro using this guide we’ve made involving your Recovery partition on your SSD by default. After doing this you’ve realistically around 18GB of usable storage on a 32GB Surface 2 which is perfectly fine, if you aren’t planning on using a microSD Card or are just generally storage unsure you can go 64GB (50GB/46GB without storage tip).

Storage Tips: If you remain Storage conscious, we can’t help you app wise, but we can give you some help and tips;

Against an iPad or Android tablet

Sure you can get 10 inch, … ish for the iPad, devices out there running alternate ARM based operating systems so how does the Surface 2 compare against them?

Quite favourable to be honest, as we’ve mentioned, you don’t have a mobile browser like Android and iOS do, you have a full desktop browser with touch input, this means the FULL websites load, not the Android and iOS friendly baby sites, you run full Flash, Javascript or HTML5 where possible, when this device wants to be a true computer it is. But at the same time you’ve got all the apps you generally need. Does the Surface 2 have all the apps and games iOS and Android users can get, or course it doesn’t, but the Surface 2 isn’t trying to be a toy, it’s a media consumption and all around tablet/laptop hybrid with great battery life, and for that it delivers, and whilst built in Office 2013 Home and Student doesn’t instantly make any device instantly productive, it’s a better start than the competitors offerings.

Everyone always goes on about their iPad and its 10 hours battery life, and with good merit because it really does deliver just that, as do many Android tablets out there too, so..what about the Surface 2, that’s also got 10 hours promised battery life right?

A quick an easy reason why is the reason Windows RT is better than Windows 8 or even Macs, in other words its the same advantage all ARM based OS’ can boast. The Surface 2 has no fan to manage when you run HD content or have to pain through awful Adobe Flash, it just gets on with it, sure the back gets slightly warm at the top, but nothing like the screaming you hear from laptops pushed to their limit, which of course means great battery life.

So, battery life on Surface 2, we really can’t fault at all!

Do you need a Touch/Type Cover?

In a word, yes, but then again no. Windows RT beneath it all is still Windows 8, you will always find the chance to type and you’ll be brought up the touch Windows 8 keyboard, which actually is very good, but with the knowledge that you could use a built for purpose keyboard, it does leave you thinking. If you intend on actually using the free bundles Office Home and Student 2013 then you definitely need one, Type Cover we’d recommend over the Touch Cover, even after the 2nd gen ones. But do keep in mind the Surface 2 is Bluetooth compatible and has a USB port, so any keyboard or mouse would work if needed, and could even be a Desktop out when plugged in to a HDMI monitor.

Can you survive without one, yes, but is worth getting one, most definitely in short.

– What can we say, every promise the Surface 2 has to give, it delivers and then some, can’t fault that!